I have to pay thanks to @paulbanoub and @emily1852 for finally persuading me to put my thoughts down on paper and share them with you. I am going to start, with my thoughts and review of the Tableau customer conference #data14 which took place during September 2014 in Tableau’s hometown of Seattle.

Firstly though, who am I?

Well in a follow up blog, I will go into this in detail, but in my current role I lead a BI centre of excellence, focussing on our Tableau enterprise deployment whilst educating our business on visualisation rules, guidelines and providing best practices.

Now the reason for the prelude.

Before I talk about this year’s conference, I need to set the scene by going back 12 months, to #TCC13, which took place in Washington.  Now that conference also took place in September and my organisation had purchased our first Tableau licence in May 2013.  This mean’t that I firstly didn’t have a lot of time to explore the tool and even less time to persuade my senior management of the merits of attending a software conference on the other side of the Atlantic.  Because of the work we were able to achieve with Tableau in such a short space of time, they were very receptive to the benefits of trying to accelerate our learning as well as understand from the Customer stories what other users were able to do, especially those within the same field as my organisation. Now originally, we planned on sending four people to attend in 2013.  Upon reviewing the agenda, speakers and schedule, I realised what a tough job selecting sessions would be and in the end after the equivalent of two days solid, came up with a plan for all of us, which was a mix of technical, leadership and customer stories for us all to attend. Then, in August, the decision was made to just send me.  So again I had to revisit the agenda and try and cherry pick what I thought would be the best sessions to attend which would allow me to answer my organisations questions. So with ticket booked, I realised that I would be attending a conference (my first in any field) in which over 2,000 customers would be attending, 3,500 miles away from home where I knew nobody. As part of our BI programme, we work with one of the big four consulting firms.  Now they have their BI HIVE (Highly Immersive Visual Environment) in Washington and arranged for me to visit this, as well as put me in touch with a few of their guys who were running the stand in the expo hall.  So that was at least one contact I had.  Our BI data architect also used to work for a large Bank, and put me in touch with their crack Tableau team, whom I had briefly met at a Stephen Few data visualisation workshop earlier in the year (I will cover this in a follow up blog post).  So I emailed the guys and asked if we could perhaps meet for lunch or dinner to talk through our various experiences.  Finally, our Tableau sales rep was able to set up a meeting with a similar business from the States, who I could meet with at the conference and share experiences. So that was two definite meetings and a couple of guys with an email address! The other person who I knew was going was @_tombrown_, owner of theinformationlab, who were Tableau’s partner of the year in 2013.  We had one of his consultants in to support us with building initial dashboards and had also spoken about further licence purchases. Now how was I going to try and engage with the remaining 1,996 attendees?  Well, social media sprang to mind.  When I went on our honeymoon, I really engaged with our resort prior to going through Twitter, which helped me to meet some other couple who were there at the same time as us, as well as get some extras and freebies from the resort, which seemed like a win to me. Twitter wasn’t a platform I used much though.  I rarely posted and mainly followed celebrities to see what they were up to.  But through using tweet deck and and having a search for Tableau and the conference hashtag #tcc13, I was able to find a few people that seemed to be posting a lot and also going to the conference. So when I arrived, I was in this big town and decided to go for a burger in the hotel sports bar and thought I would see who was about by tweeting my view. 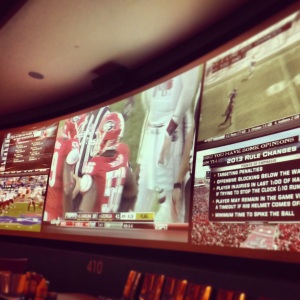 Within minutes, I had people responding on both twitter and walking up to the table, where minutes before it was empty, I soon had Andy Cotgreave, Tableau’s social media manager, Susan Baier owner of Audience Audit and the aforementioned Tom Brown and some of his team.  After a few beers and a few additions to the table (well tables as we started overflowing!) a young quiet chap came and sat next to me, Andy said have a chat as he was British as well, and this turned out to be the infamous Matt Francis who was also at his first US conference and told me he was a little star struck to be sitting at a table with so many Tableau Zens and legends.  I had no idea what he was going on about and to be honest thought he was a bit nuts, putting these ‘data geeks’ up on a level with celebrities (what would I know fast forwarding 12 months), but it turned out with had Michael Cristiani, Greg (the Lewandog) Lewandowski, Chuck Hooper and Craig Bloodworth to name but a few sitting around the table.  What we discussed and I learned that night, helped to shape the conference and also start to formulate an understanding of the Tableau community and how I wanted to become a part of it as well as discover how much these guys wanted to share – at absolutely no cost, just through the joys of giving stuff back. The conference turned out to be a personal triumph.  I learned a lot.  I watched how other customers used Tableau, especially those in my organisation’s field, and took that back to help develop our Tableau programme. I briefly got to meet the other two guys  – who also appeared bonkers, presenting on stage in High Viz jackets and Hard Hats!  I thought this was supposed to be a software conference? 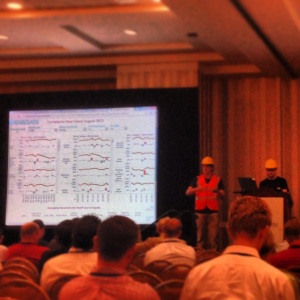 These turned out to be Peter Gilks and Carl Allchin, a couple of guys I would end up interacting with a lot and taking influence from their blogs.

Most of the week was spent with the people I mentioned above, I also used the twitter feed a lot, to see what was going on and also to feed the competitive nature in me to try and work my way up the leaderboard – although Matt Francis had the lead on that one.

This was also my view for the keynote – something I had never experienced before, fast forward 12 months and my view was very different.  I live tweeted and gained a lot of followers and when I returned, I changed my twitter focus, deleting most of the people I followed and using it instead to help with my Tableau and data visualisation journey.  Do not underestimate how powerful this can be in making contacts and understanding what is hot – the challenging part can be finding the time to read all the updates from people you are following.

My next post will be all about this years conference and will be up within the next week.

For the love of data, analytics & Tableau.

Welcome to our theme based Data Visualization platform!

An educator's thoughts on Tableau, data visualization... and other ramblings.

Musings about data, visualization & Tableau - and occasionally other stuff

I love reading blogs about data, and now i love blogging about data.........

Film blog with a bit of life thrown in

Eclectic Mess: Thoughts on Everything

Fathering in the Now

Musings on parenting and presence